This issue of Acoustics Today (AT) introduces a new series of “Sound Perspectives” essays, “Conversation with a Colleague” (CwC). Edited by AT Associate Editor Micheal Dent, CwC focuses on mid- and senior-career Acoustical Society of America (ASA) members who have made a substantial contribution to their field. The individuals may be from academia, industry, and/or government.

The purpose of CwC is to introduce the broad ASA audience to leaders in acoustics and to teach about diverse areas of the discipline. CwC essays will be shorter and much more informal than articles in AT. Most importantly, and unlike regular articles, the essays will focus on the contributions of a single person rather than on a broader field. We also want to “drive” CwC essays to have roughly the same information, and so our colleagues will be asked to answer a specific set of “prompts” in their responses. 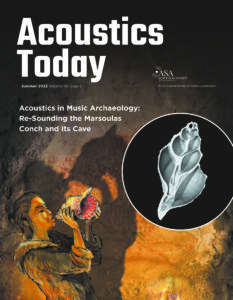 From the Editor
From the President

Acoustics in Music Archaeology: Re-Sounding the Marsoulas Conch and Its Cave  – Miriam A. Kolar, Carole Fritz, and Gilles Tosello

Rainfall at Sea: Using the Underwater Sounds of Raindrops as a Rain Gauge for Weather and Climate  – Barry B. Ma, Brian D. Dushaw, and Bruce M. Howe