“The name Amphibia literally signifies “both lives” and refers to the proclivity of many of these animals for alternating between aquatic and terrestrial habitats.”

Perhaps no other acoustician of the modern era so embodied the amphibian’s apparent ease of transition between worlds as Wever, who in the words of his student Dick Fay, had no less than three careers as a hearing scientist: one in the biomechanical workings of the cochlea, one in the nature of hearing and sensory coding, and one in the evolutionary biology of hearing.

Ernest Glen Wever, who was known to his students and colleagues as Glen, was born in 1902 in Illinois. He completed his MA and PhD in Experimental Psychology at Harvard University in 1924 and 1926 respectively and was then recruited to the faculty at UC Berkeley. After one year at Berkeley, Wever joined the Psychology Department at Princeton University in New Jersey and stayed there for the remainder of his career. Although Wever’s graduate work was in visual perception, specifically in the ways that a figure is partitioned from the background of a scene, he first forayed into auditory science while at Berkeley. When a student approached him to think up a dissertation topic, Wever proposed a similar figure-ground experiment for an auditory scene (Vernon, pp. 376). This endeavor put Wever in contact with Bell Telephone Laboratories, which provided him with an effectively permanent loan on the equipment he needed: amplifiers, sound level meters, and audio-oscillators.

The influence of telephony on Wever’s work is clear in one of his most renowned achievements, the discovery of the AC cochlear potential, also called the “Wever-Bray phenomenon” and the “cochlear microphonic” (Wever and Bray, 1930). Teaming up with another member of the Princeton Psychology faculty, Charles Bray, Wever set out to answer foundational questions about how the frequency and intensity of a sound is represented in the auditory nerve. Wever and Bray exposed the auditory nerve of a sedated cat and wrapped an electrode around the bundle of fibers. One experimenter sat in a sound proof room with a telephone receiver some 60 feet away. The other spoke into the cat’s ear. The signal from the electrode was amplified and delivered to the listener, who heard—with surprising ease—the voice of his partner, reproduced in remarkable fidelity.

For this work, Wever and Bray were the very first recipients of the Howard Crosby Warren Medal from the Society of Experimental Psychologists in 1936, a prestigious honor that his contemporaries B.F. Skinner, Karl Lashley, and Georg von Békésy would also win in later years. Curiously, it would later be revealed that the signal Wever and Bray measured was not action potentials from the auditory nerve, but potentials emanating from the cochlea itself (Hallowell and Derbyshire 1934). Nonetheless, Wever’s detailed looks at the anatomy and physiology of the inner ear was unsurpassed in its time, and he published a 454-page landmark guide with Merle Lawrence called Physiological Acoustics in 1954 that is still regularly cited today. Another lasting impact of Wever’s physiology work is that the cochlear microphonic is used today as an indicator of cochlear health, particularly in the diagnosis of conditions such as Meniere’s disease or endolymphatic hydrops.

As early as his influential collaboration with Bray, Wever was also thinking about the nature of the neural code for sound. In their 1930 manuscript, he considered how frequency could be coded for sounds with frequencies that exceeded the known firing rates of neurons:

“The discovery of impulses in the auditory nerve establishing a frequency above 4000 ~/sec. is indeed beyond the usual predictions, as it represents a rate considerably above that previously found in any nerve; but it must be pointed out that a high rate of impulses in the nerve as a whole does not necessarily define the nature of refractory phase and hence rate of response in the individual fibers; it is possible for a high rate to be established by slowly acting fibers going off in volleys.” (pp. 349)

Here, Wever was outlining the volley theory of frequency coding. In other words, he argued that it is not necessary for a single fiber to fire an action potential at every cycle of a sinusoidal signal; so long as there is a population of several fibers that behave independently, the frequency can be coded by volleys of spikes carried by multiple neurons that each fire on only some cycles. Volley theory was the central subject of another book of Wever’s, Theory of Hearing[1] (a 1951 book review in Physics Today can be found here).

Wever trained five graduate students at Princeton, including ASA Silver Medalist Dick Fay, Jim Saunders, Jim McCormick, and ASA Fellow Jim Simmons. He was also a collaborator of society Fellow Sam Ridgway, who pioneered veterinary medicine for marine mammals and was instrumental in the first studies of dolphin physiology. Through a trans-continental partnership between Sam Ridgway at the Naval Bioscience Facility in Point Mugu, California and Wever’s lab in New Jersey, a program of research was conceived to characterize the auditory system of the dolphin using behavioral and electrophysiological methods. In a feature about Wever’s dolphin research in the Princeton Alumni Weekend magazine, he confessed that his interest in the species was “somewhat limited” (McVay, pp. 17); he was not motivated by the particulars of the dolphin so much as he sought to understand how a mammalian ear that first evolved on land was re-adapted to an aquatic habitat.

Indeed, Wever’s laboratory was constructed with the flexibility to accommodate whatever experimental methods were called for (see Figures 1-5 for images of the lab and its staff). Wever himself drew the blueprints for the Forrestal Campus Auditory Lab, a facility at Princeton that he occupied starting from the early 1960s (McCormick, 1983). His student Jim McCormick recalled it as “a first-class operation which easily accommodated the study of 1-g lizards to 400-lb dolphins” (pp. 24). Another former trainee, Jim Saunders, recalled his mentor’s generosity in procuring whatever equipment might be necessary for a new experiment—which was often, as Wever sought “every frog and salamander he could get his hands on” (personal communication). If money was tight, he looked to the surplus market.

In this spirit, Wever had dolphins airlifted from Florida in 1967 for his collaboration with Sam Ridgway. The short-term holding tank for the dolphins was later repurposed for giant green sea turtles. The lab was at all times stocked as well as some zoos: small animals in building A, bats for echolocation experiments by Wever, Jack Vernon, and Jim Simmons in building B, fish in building F (although the naming system was not always strict: building B housed penguins on its porch for some time). The idyllic setup was noted by Wever’s critic-turned-friend and fellow auditory scientist, Georg von Békésy. McCormick recalls, “In the late 1960’s, when Dr. von Békésy moved his laboratory from Harvard to the University of Hawaii, he came to Glen Wever for help in designing his biomedical engineering section. Békésy was so impressed with Wever’s shops—especially the machine shop—that he decided to duplicate them down to the last detail” (pp. 42).

In the course of Wever’s nearly six-decade-long scientific career, he established himself as a pioneer in hearing research whose approach knew no methodological bounds. In search of a fundamental and mechanistic understanding of the auditory system, he saw no limits, only complications: whether the organic path of inquiry demanded state-of-the-art telecommunication equipment, airlifting dolphins, or catching his own bats, Wever answered the call. He is fondly remembered by his colleagues and students as a friend, a meticulous scientist, and a gentle but irreplaceable force of learning.

Jack Vernon, who collaborated with Wever to study echolocation in bats, wrote a short biography for the National Academies of Science.

Dick Fay, a student of Wever’s and Acoustical Society Fellow, wrote a brief biography about his mentor with fascinating notes about Wever’s friendship with Békésy.

A complete listing of Wever’s publications can be found here. 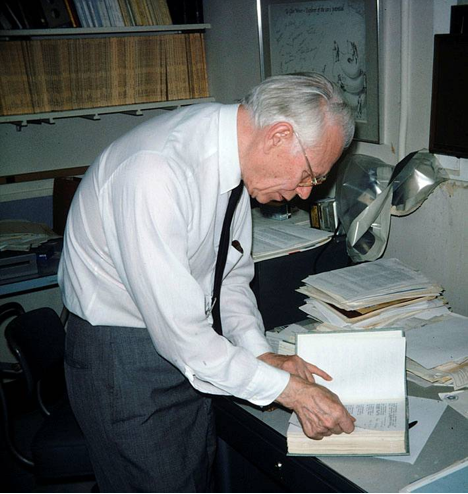 Figure 1. Wever in his office at the Auditory Research Lab at Princeton University, 1970. Source: James McCormick. 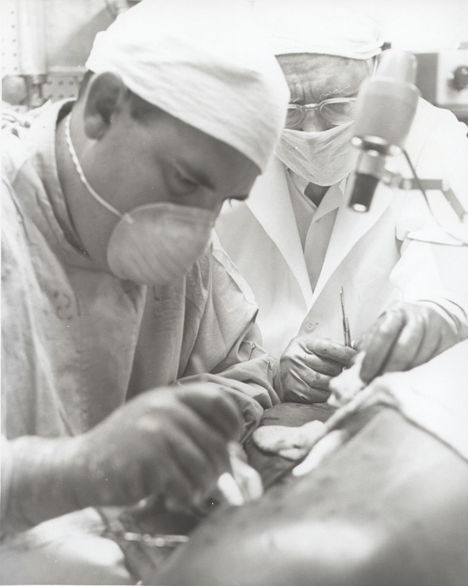 Figure 2. Wever (right) and Sam Ridgway (left) operate on a dolphin at the Auditory Research Lab at Princeton in 1969. Photographed by Jack Conover. Source: Sam Ridgway. 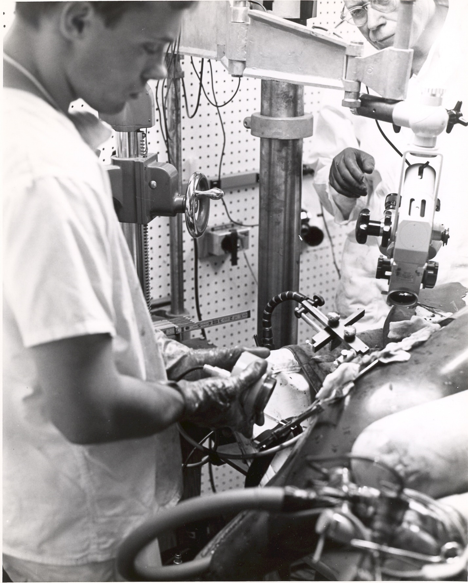 Figure 4. An aerial photo of the Auditory Research Lab at Princeton taken by James McCormick. 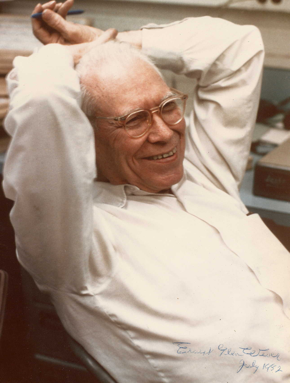 [1] In a brief biography of Wever, John Vernon comments on Theory of Hearing: “That book, by the way, was reported to be the first manuscript ever received by Princeton University Press that was totally free of error. Glen was never too busy or too distracted not to be totally accurate and totally complete.” (Vernon, pp. 373).