8 • The World Through Sound: Resonance

Welcome to another installment of The World Through Sound. Last time we talked about Acoustic Impedance, and how horns are actually a kind of transformer, and operate in a way analogous to how a lever makes a large mass easier to move. In this article, we will talk about resonance, how resonant systems are all around us, and the Q-factor, the number that tells how strong a resonance actually is.

Resonance is one of the few acoustics concepts that has worked its way into the public consciousness, and a certain mythology has risen up around it. Resonance allows sound to do surprising things, like shatter a wine glass, and vibrational resonance is often (incorrectly) blamed for the dramatic collapse of the Tacoma Narrows Bridge in 1940, driven only by a strong wind. Some have extrapolated out from these sorts of events to conclude that everything has a resonant frequency, and need only be exposed to a sound at that frequency to be destroyed. Some sonically powered superheroes even include this in their arsenal. 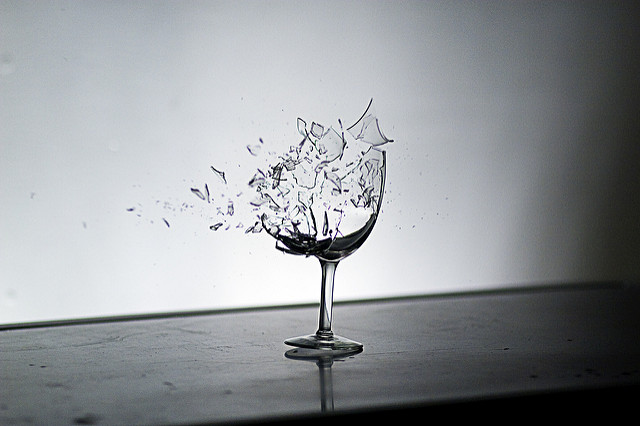 Resonance has earned a reputation as a destructive force, capable of shattering nearly anything.

To understand this a little deeper, we must first learn what resonance is. Resonance occurs when a system preferentially vibrates at a certain frequency. This frequency is called the “resonant frequency,” and the system will respond very strongly to any periodic force at that frequency. The exact frequencies at which objects resonate is largely determined by the objects physical properties: its size, shape, and the materials that it’s made out of. The different thicknesses and lengths of strings in a piano, for example, are what cause each note to sound different (see the Spring 2016 issue of Acoustics Today for a fascinating article about how pianos work and take advantage of different resonant frequencies).

Resonance also occurs in non-acoustic systems. Electrical systems can have resonance, like those used in timing circuits, optical resonances allow the creation of lasers, atoms and molecules have nuclear magnetic resonances that are used in magnetic resonance imaging (MRI) scanners. Far from being unique to acoustics, resonance is a universal phenomenon.

At its core, resonance occurs because energy is stored in multiple forms in a system, and moves back-and-forth between them. The classic example is a child’s swing. At the apex of the swing, the energy is stored as gravitational potential energy, as the swing descends, energy is transferred to kinetic energy. This kinetic energy is redirected upwards and is again stored as potential energy. The time that it takes for this process to occur is the basis of the system’s resonant frequency (which is the number of swings per unit time).

The classic acoustic resonator is the Helmholtz resonator. An empty bottle is a familiar example of this resonator, and it works in much the same way as the swing. A Helmholtz resonator has two parts, a neck and a volume, and acoustic energy moves between them. Energy is stored in the volume in the form of pressure, this pressure then pushes on the air in the neck, causing it to gain kinetic energy as it flows. This transfer between pressure and flow energy forms the basis of this resonance, and ultimately allows us to make a pure tone when blowing over a bottle’s neck.

Many objects have resonant frequencies, and they are the source of many of the sounds we hear. When you knock on something, much of the sound you hear is just the ringing of that object’s resonances, for example. Even, [our own bodies have many different resonant frequencies]( ). But if so many objects have resonances, why can’t we shake them to pieces like a wine glass or the Tacoma Narrows Bridge? The answer is damping, and an essential descriptor of any resonator: the Q-factor.

Critically damped systems don’t vibrate at all, while systems with a higher Q-factor (lower damping) ring for a longer amount of time.

Damping is simply any loss of energy in an oscillating system that causes it to lose amplitude over time. Two common forms of damping are energy loss to heat, and energy transfer to other systems. A great example of this second form is sound generation, when an oscillating system sends out some of its stored energy as sound into the environment.

The amount of damping in an oscillating system leads to its resonant Q-factor. The Q-factor (or Quality-factor) is a measure of how good of a resonator a given system is. A high Q-factor means the system resonates strongly while a low Q-factor is the opposite. For a benchmark, a typical tuning fork (a strong resonator) might have a Q-factor of 1000, while a critically damped door closer would optimally have a Q factor of 1/2. Mathematically, my favorite definition of the Q-factor is that it’s 2π times the energy stored in the system divided by the energy lost per cycle. By this definition, we can see that a tuning fork loses only 0.63% of its total energy every cycle to heat or sound generation, allowing it to ring for a very long time!

The Q-factor is the reason why some systems do not really resonate, and others can shake themselves to destruction. This becomes obvious when we reverse the understanding of the Q-factor. Instead of considering the energy lost by the system each cycle, we can compare how much energy needs to be pumped into the system each cycle to maintain a certain level of energy stored. This gives us an energy magnification for an oscillating system. By this interpretation, we can calculate that a tuning fork with a Q-factor of 1000 magnifies the energy in the system by a factor of 159 because it ultimately stores 159 times more energy than is put in each cycle. (Of course, because of conservation of energy, it might take many cycles to build up to that amount of stored energy.)

Going back to the example of the wine glass being shaken apart by sound, a crystal wine glass has a rather high Q-factor because of the material’s structure. As a result, as sound energy is sent at the glass, the glass builds up its own energy and ultimately vibrates so hard that it tears itself apart. If the glass were made of some other material such as plastic, the losses in the material would lower the Q-factor and render it safe from this sort of destructive force. Indeed, while many objects in the world around us have frequencies that they preferentially vibrate at, their Q-factors are so low that they barely respond at all to this sort of abuse.

That’s not to say that resonance is not important, however. We have resonance to thank for so many things, from musical instruments to radios to atomic clocks. Resonance is one of the fundamental phenomena not just of acoustics, science in general. But resonance itself does not tell the whole story, and it’s only through the understanding of the Q-factor that we can determine when a resonance is truly noteworthy, and when it is not.

Next time we will delve deeper into resonances and consider normal modes. We will appreciate the beautiful patterns that modes can create, and learn about when modes become so numerous that they blend together and become something new.