Aim of this multimedia demo

The aim of this multimedia demo is to illustrate the changes in voice fundamental frequency (also called ‘voice pitch’) that occur as a function of age and talker sex. The recordings are taken from two speech corpora recorded at UCL: kidLUCID and elderLUCID. The kidLUCID corpus is accessible at the OSCAAR archive based at Northwestern University, and the elderLUCID corpus will be made available by mid 2017.

Using the diapix task to elicit spontaneous speech in interaction

‘Diapix’ (van Engen et al., 2011, Baker and Hazan, 2011) is a problem-solving ‘spot the difference’ picture task used for eliciting spontaneous speech interactions between two participants. Participants have to try and work out what 12 differences there are between their pictures without seeing their partner’s picture. The pictures are carefully designed to elicit certain vocabulary items. This task has been used with children aged 8 years and above as well as with adults aged up to 85 years. To get a ‘clean’ recording for each participant, the diapix task can be done with each participant seated in a separate sound-treated booth and communicating via headphones. 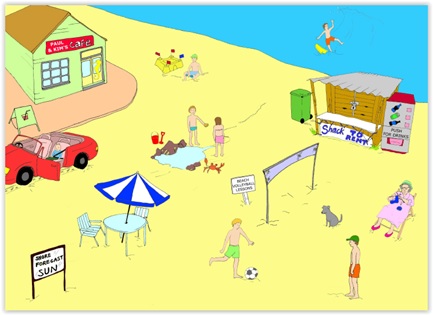 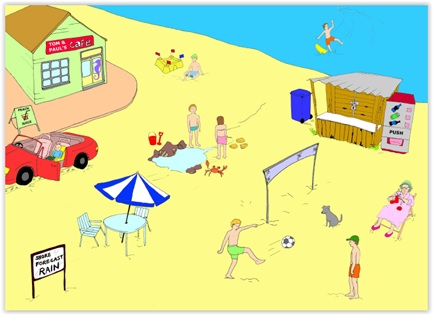 The following examples illustrate the changes in the fundamental frequency of the voice (‘voice pitch’) for female and male talkers at different ages.  They are extracted from recordings made while participants were carrying out the diapix task with their conversational partners in good listening conditions. All talkers are discussing the shack on the top right hand side of the pictures above. Median fundamental frequency (f0) values were calculated over the whole recording of the diapix task lasting 5-6 minutes on average.

Note how similar f0 values are for male and female talkers at this age. It is quite difficult to reliably tell the sex of the talker from the voice.

Here, you notice that the median f0 for the 13 year old girl is lower than that measured for the 9 and 11 year old girls. The first male talker, 14 year old M21, is still showing a high f0 while M07, also aged 14,  is more advanced in puberty and shows a dramatic reduction in median f0.

The research reported here was carried out by Valerie Hazan and Outi Tuomainen (Speech, Hearing and Phonetic Sciences, UCL), and was funded by two grants from the UK Economics and Social Research Council (RES-062-23-3106 and ES/L007002/1). We acknowledge the contribution of:  Michèle Pettinato as postdoctoral researcher on the project involving child speakers, Jeesun Kim and Chris Davis (MARCS Institute, Australia) as co-investigators and Doug Brungart and Ben Sheffield (Walter Reed, USA) as collaborators on the project involving older adults. All individuals included in this demonstration have given consent for their recordings to be used without restriction.