Carleen Maley Hutchins, winner of the Acoustical Society’s Silver Medal in Musical Acoustics (1981) and an Honorary Fellow of the Society (1998), stands apart in her field: she is not just the only woman to ever be awarded the Honorary Fellowship—an award shared with titans such as Thomas Edison, Harvey Fletcher, and Leo Beranek—but one of the few honorees without a doctoral degree. Over the span of more than fifty years of largely self-directed research, almost exclusively accomplished in her home workshop in Montclair, New Jersey, Hutchins married the science of acoustics to the aesthetics of violin craftsmanship and in the process permanently altered the landscape of musical acoustics research.

Carleen Hutchins (née Maley) was born in 1911 to a middle-class Brooklyn (New York) family that owned a cigar factory. After receiving her bachelor’s degree in biology from Cornell University she became a grade school science and woodworking teacher in Manhattan (Whitney 2016). Although Hutchins hoped to attend medical school, she was discouraged from becoming a physician by her gender and financial status. While pregnant with her first child, Hutchins became inspired to try building her own viola to play in a local chamber music group. Hutchins had always gravitated towards woodworking and music: she played the bugle at Girl Scout camp from the age of eight, and enrolled in shop class as a teenager when many of her peers took home economics. Naturally, constructing an instrument posed a tempting challenge to Carleen. “Since I had eight years of good wood-working training in Montclair, NJ schools and loved to work in wood, I decided to make myself a viola,” she recalled in an interview for an Acoustical Society newsletter.

In this interview, she also explained how she entered acoustics research:
“Then I was introduced to two experts who changed the course of my life: Karl Berger, a very fine Swiss luthier who was willing to teach me real violin making; and Frederick Saunders who had retired from Harvard and was continuing his violin research at Mount Holyoke. Saunders looked at my viola, tapped around on it, blew in the f-holes and said, “Young lady I’ll be interested in your next one.” I hadn’t planned to make a “next one,” but when I read some of Saunders’ papers I decided to make him some experimental instruments that he could cut up. This began 15 years of experimental research on violins and violas that I did with Saunders.”

With Saunders (a Harvard emeritus professor of physics and Acoustical Society president from 1937-39), Hutchins began exploring how modes of vibration—called Chladni patterns—could be used to test the construction of front and back plates of the violin (Figure 1). By tuning the plates via carefully thinning and shaping the wood until a certain pattern of vibration could be achieved (visualized with sand or, in some of Hutchins’ publications, craft glitter), Hutchins and Saunders investigated how structural properties of the violin body relate to its perceptual qualities—in other words, they asked how the resonance of the instrument determined whether a rich or poor tone was achieved. Because Hutchins and Saunders had no means of simulating how a particular kind of construction would produce Chladni patterns, Hutchins built dozens of instruments with various specifications exclusively to experiment on. Much of this collaboration was accomplished through the mail, with Hutchins sharing results from her home workshop and Saunders suggesting next steps on postcards (Whitney, 2016). It is particularly notable that Carleen’s entry into acoustics research began in her forties, without much formal scientific training (save for her Bachelor’s degree in biology) before then.

In 1963, Hutchins attended her first Acoustical Society meeting in New York City. She had recently published a single-author article about the Chladni plate tuning method in Scientific American (Hutchins, 1962) and was personally invited to present at the ASA meeting. The day after the close of the meeting, she and several friends founded the Catgut Acoustical Society for researchers studying the acoustics of the violin family (so named for the material that violin strings were traditionally made of). This cohort included John Schelling of Bell Labs, who wrote an influential paper called “The Violin as a Circuit” (Schelling, 1963).

Even as she launched her own society, Hutchins was an active presence in the Acoustical Society: she was first asked to chair the Violin Acoustics Symposium at the 1969 meeting and maintained close involvement in the Musical Acoustics Technical Committee for several decades after. When R. Bruce Lindsay (for whom the Lindsay Award for young investigators is named) asked her to edit a benchmark collection of research on violin acoustics from 1800 on, she happily agreed (Whitney, 2016)—and in 1997, she edited yet another exhaustive collection of research papers for a book published by the Society to highlight the developments of the previous two decades.

Hutchins gained renown not only for her scientific contributions, but also for the instruments she created and sold to many leading musicians. In particular, Hutchins is celebrated for creating the violin octet, a family of eight carefully sized and tuned instruments that span the full range of notes covered in written music—intended to improve the homogeneity of acoustic quality across the entire range relative to the popular family of violin, viola, cello and bass (Hutchins 1983; see Figure 2). “The Hutchins–Schelling violin octet occupies an honored place in the field of musical acoustics because it is the very first example of the use of physical scaling laws to design a plucked or bowed string instrument,” writes musical acoustician George Bissinger (pp. 2105, Bissinger, 2003). It similarly caught the attention of conductor Leopold Stokowski, who shared Hutchins’ intensely technical approach to musicianship. Stokowski and Hutchins exchanged several letters and even instruments (Whitney 2016). In 1993, the great American cellist Yo-Yo Ma gave a public performance of Bartok’s Viola Concerto on her alto violin—in 1995, this performance won him a Grammy.

When Hutchins died in 2009 at the age of 98, she had received many outward signs of success: in addition to publishing more than 100 scientific works and receiving the Honorary Fellowship of the Acoustical Society “for her role in combining the art of violin making with the science of acoustics,” her instruments were on display in museums across the world, from the Met to the University of Edinburgh’s collection (Fox, 2009). Still, Hutchins struggled to win acceptance from the broader community of luthiers, who often appeared to reject her approach: “The old-time violin makers hate my guts…I’ve been at it since 1947, and there’s a camp that still won’t accept it. I’m putting numbers on their mystique,” she once told a reporter (Langer, 2009). But to Hutchins’ biographer, Quincy Whitney, the legacy of America’s most forward-thinking luthier transcends her craft (Whitney 2016, pp. xvii):

“…Carleen Hutchins touched every corner of the violin world—the study of sound, music and violinmaking; history and anatomy; science and violin acoustics; consorts; musicology; museum collections; virtuosos; and the violin market. Like the immutable parts of a fiddle working together to produce one marvelous sound, all these worlds connected to one another as the interlocking themes of the fugue played out in the life of Carleen Maley Hutchins.”

Further reading
The most authoritative and information-rich compendium on Hutchins’ life and work is the biography American Luthier, by journalist Quincy Whitney (2016). Whitney’s thorough study contains many more details than could be neatly summarized here, including the astounding extent of experiments and collaborations Hutchins pursued, a closer look at the history of violin making, and exploration of Hutchins’ personal life and challenges as a woman in acoustics. Also of note is Whitney’s presentation at the Library of Congress about the book, which features a demo of two Hutchins instruments.
The Hutchins Consort is a group of musicians who perform using Hutchins’ violin octet. Their website contains video and audio of recent performances, as well as upcoming concerts, media coverage and events related to Hutchins’ legacy.
The Catgut Acoustical Society continues today and its website contains a trove of historical information written by its longstanding members. 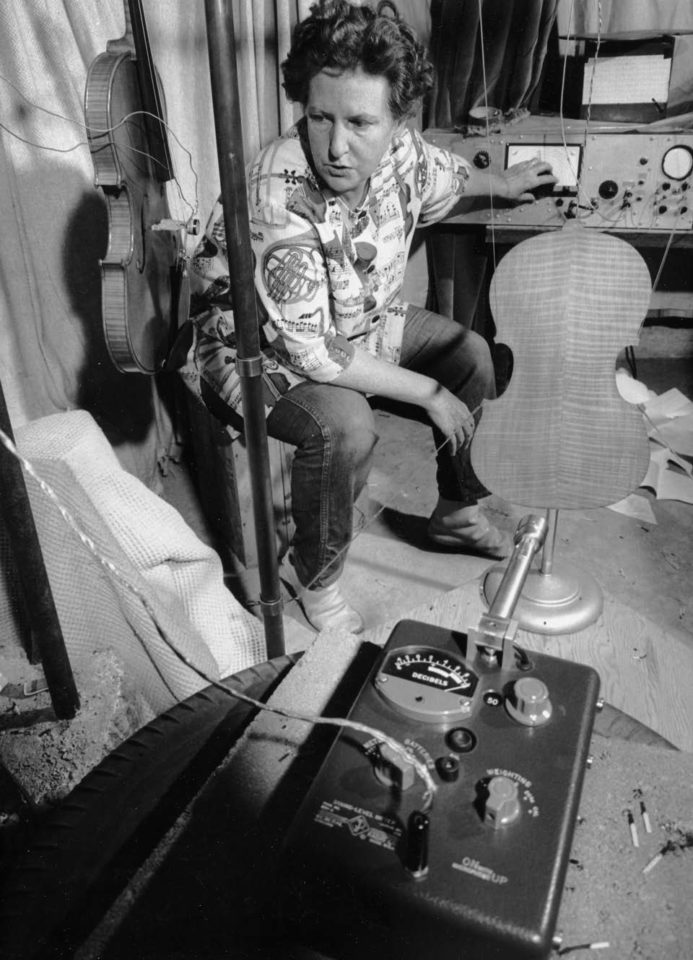 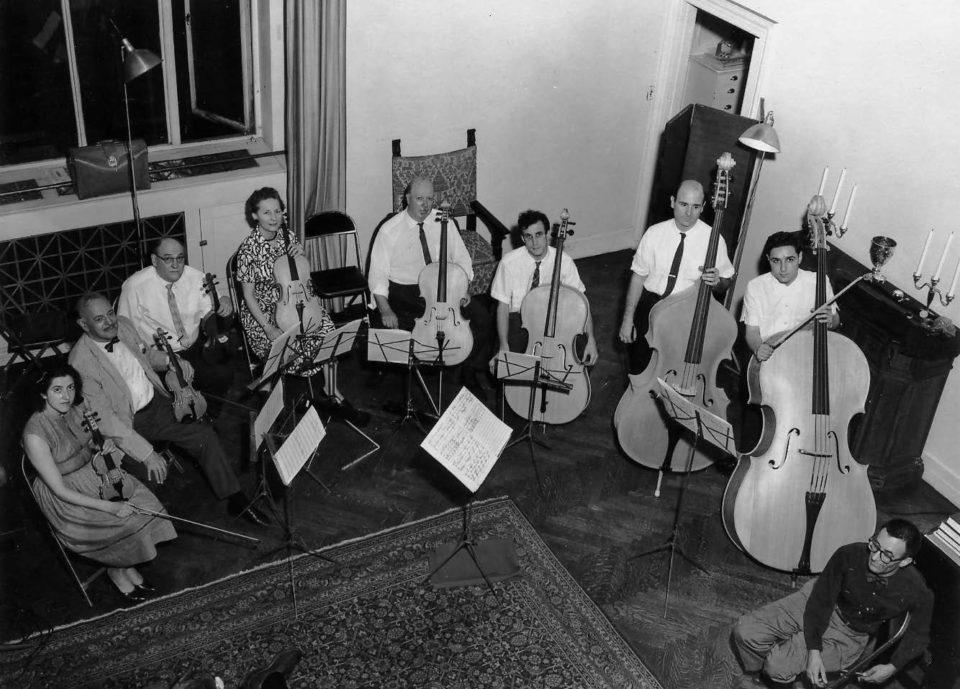 Figure 2. The Hutchins violin octet, on May 24, 1964. Courtesy of the Hutchins estate. From Science Friday.