Reading through the Acoustical Society of America’s list of honors, Katherine Safford Harris is a notable name: she appears twice, as the winner of the  2007 Gold Medal “for pioneering research and leadership in speech production and dedicated service to the Society”, and the 2005 Silver Medal in Speech Communication. She also served as the President of the Society from 2000-01. These awards reflect her stature as a scientist who lead many of the last century’s critical advancements in understanding the perception, production, and disorders of speech.

Harris was born in 1925 in Massachusetts and attended Radcliffe College outside Boston, from which she graduated with a degree in Experimental Psychology. Following that, she pursued her graduate study at Harvard, where she was awarded a Ph.D. in 1954. During her training, she spent time as a research assistant in famed behaviorist B. F. Skinner’s lab. Harris recalled,

“Well, for a while when I was Fred Skinner’s research assistant, I was engaged in the project. His argument was that you could teach any animal anything, if you broke it down properly. So I spent a great deal of my time and energy trying to teach pigeons to play ping-pong. At best they play very badly.”

Harris cited fellow graduate student Ira Hirsch as one of her greatest influences from this era. Hirsch, who is recognized as one of the founders of audiology and a leading auditory psychoacoustician, also served as President of the Acoustical Society (1967-68) and won the Society’s Gold Medal (1992)—just like Harris. In an interview for the American Institute of Physics (AIP) Oral History Archive, Harris spoke of the tremendous role of her colleagues and professors in her life: “All my inspirations were academic figures, I may say.”

Harris accepted a position at Haskins Laboratories (then based in New York City) in 1952. Harris’ initial appointment was partially a result of circumstance; namely, that her other employment prospects would not provide accommodations for a woman (AIP, 2001):

“When I came to New York to marry George there were three jobs I sort of interviewed for. One was with the Bureau of Ships doing research on submarines. The man I talked to felt they could not solve the toilet problem. I interviewed at Brooklyn College, where I was told that I was in the wrong field — they did not have women in Experimental Psychology. So then I went to Haskins Labs where Frank Cooper hired me and I never went anywhere else.”

When Harris joined Haskins in 1952, Franklin Cooper—a physicist by training, a fellow of the Acoustical Society of America, and Silver Medalist in Speech Communication —was president. Cooper had invented the Pattern Playback, an early speech synthesizer that converted images painted on cellulose acetate to sound (a video can be seen here). By painting simplified spectrograms on the acetate, researchers could use the Pattern Playback to systematically study the relationship between acoustic qualities of a speech-like sounds and their perception (Cooper et al. 1952).

Using this device, Harris contributed to several fundamental findings in speech science. She was among the first researchers to demonstrate that listeners typically behave categorically when asked to label phonemes, the speech sounds of their language (Liberman et al. 1957, 1961)—in other words, they are less able to discern fine-grained differences between speech sounds that are perceived as belonging to the same category (such as “ba” or “da”). In another study with the pattern playback, Harris and her colleagues characterized the role of third-formant transitions—a narrow band of acoustic energy— in the perception of stop consonants (Harris et al. 1958). Harris also led research investigating the acoustic cues for fricative perception in American English. Using a careful method of recombining magnetic tape recordings of spoken fricatives, she identified the acoustic cues that distinguish [f], [θ], [ʃ], and [s], as in, fish, this, ship, and sip (Harris, 1958). In this era, Harris collaborated with Alvin Liberman (a Fellow of the Acoustical Society), Pierre Delattre, and Leigh Lisker, to name a few of her co-authors.

Considering the body of work that Harris produced as part of Haskins Labs in the 1950s and early 1960s, one senses the freshness of ideas that are now central to speech science. Harris and her colleagues were the first to investigate the acoustic cues underlying speech perception in such a systematic manner: using technology to directly manipulate sounds and, through careful behavioral studies, recovering the effect of these modifications on perception. As such, a kind of pioneer ethos comes through in many of the early Haskins manuscripts.

This spirit is especially present in Harris’ use of electromyography (EMG), a technique for recording electrical signals from musculature (Figure 1). Harris is widely credited as a leader in bringing EMG to speech science. In a statement by the Acoustical Society made to honor Harris at the 2014 Women in Acoustics Spring Luncheon, the magnitude of her work is described:

“While her first research focused on speech perception, it is her later, pioneering, research in EMG studies of speech production that are her most significant contributions to speech science. Today EMG research falls under the area of neuroscience research. With her first EMG publication in 1964 (Harris, Rosov, Cooper and Lysaught, 1964), she is clearly one of the founders of a research tradition that studies human behavior through neuroscience methods.”

Harris and her colleagues at Haskins first used EMG to explore whether the motor patterns of speech production provided an “invariant” code for speech—in other words, that these patterns were more stable representations of phonemes than the acoustics of spoken words. This line of work was critical to their arguments for a motor theory of speech perception. For many years, Harris used EMG to characterize how the complex and carefully-timed muscle movements of speech were planned and executed by the nervous system (Bell-Berti and Harris 1976; both authors are shown in Figure 2).

Harris’ career at Haskins extended several decades, and in this time,  she was an author on more than 200 scientific publications. She wrote on many aspects of communication disorders, including aphasia (Shankweiler et al. 1968; 2010), apraxia (Freeman et al. 1978), and speech production in individuals with severe hearing loss (Huntington et al. 1968). In 1980 she authored the Speech Science Primer, a textbook for students of speech pathology and audiology. In 1995, Springer published a volume of papers on speech production, anatomy, physiology and speech disorders that was dedicated to Harris, called Producing Speech: Contemporary Issues.

In addition to her active research career which spanned many subdisciplines of speech science, Harris served as the Vice President of Haskins Laboratories and held a faculty position at the City University of New York. She played an active role in the Acoustical Society since she joined in 1954. Harris described her relationship with the society fondly: “Let me say, I have been a member of the Acoustical Society for a very long time. It’s been a very satisfying relationship for me for a very, very long time.” 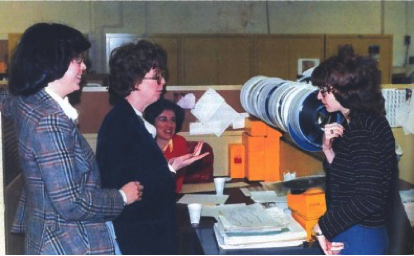