Welcome to the third installment of Interviews with South American Acousticians. You can find the previous interviews at https://acousticstoday.org/interviews-south-american-acousticians/

The acoustician interviewed in this installment is a young acoustician from Venezuela, Gabriela Santiago. Gabriela, holds a Msc on Environmental Studies, and is currently a Ph.D. candidate at Universidad de Los Andes. She is the representative of the Young Acousticians Network for Venezuela and was the coordinator of The Week of Sound in Venezuela. Her academic interest are acoustics in intelligent environments, noise pollution, cognitive neuroscience of hearing, media art, and audiovisual sound design. Citations of some of her publications are at the end of this interview.

Ernesto: Hello Gabriela Virginia Santiago, it is a great pleasure to interview you. Welcome to the section Interviews with South American Acousticians of Acoustics Today.

Gabriela Santiago: Thank you, Ernesto. The pleasure is mine.

Ernesto: Where are you from and how were your beginnings with acoustics?

Gabriela Santiago: I am from Mérida, Venezuela. In my childhood I was in a music school in Mérida learning to play the piano. However,  I was not as good as I wished so I thought that maybe I could be better studying the science and technique involved in music than I was in the art itself. When I graduated from high school I searched for options to study in Mérida, and I started my studies in Media and Filmmaking at the Universidad de Los Andes in 2008, taking the specialization branch in sound. Even though the major part of the courses were about sound recording, editing, and mixing in audiovisual media, in the last year one of the courses was acoustics and it was my favorite.

One of the requirements for graduation was to do an internship. One of my professors suggested that I search for an acoustic laboratory. I searched on the internet and the first result was the Acoustics and Electroacoustics Laboratory (LAE, its acronym in Spanish) in the Universidad Nacional de Rosario, Argentina. I contacted Professor Federico Miyara, the director of LAE, and fortunately he accepted me as intern in the laboratory during 2012.

From that moment, acoustics became officially my passion, and the work I have done since then is related to it. It is the middle point between art and science.

Ernesto: What kind of work have you done?

Gabriela Santiago: During my career, I worked for several student’s short films in the team of sound involving preproduction, production, and postproduction. After my internship at LAE, I had to complete my thesis. It had to be related to audiovisual media and I started to work with Msc. José Erre, a specialist in neuroscience who lives in Spain. After several conversations we agreed to work with cognitive neuroscience of hearing applied to audiovisual sound design (Santiago, 2012). In 2013 I presented some details of this work in the 42nd edition of the INTERNOISE congress held in Innsbruck, Austria (Santiago, 2013). In the same year, I started to work as professor at the Universidad de Los Andes teaching the courses in acoustics, microphone techniques, and sound mixing. Also in 2013, I started a Postgraduate Program at the Universidad Nacional de Córdoba, Argentina. My final work was about acoustic meanings in media arts. It was presented in the SAE Brasil International Noise and Vibration Colloquium (Santiago, 2014) in Santa Catarina. 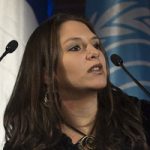 Colleagues and good friends from Argentina connected me to Christian Hugonnet, the president of La Semaine du Son, and we organized the first edition of The Week of Sound in Venezuela. It was held in Mérida in April 2015 under my coordination. It was a great opportunity to have in our University some international guests that work with acoustics and audiovisual design. In 2016, I presented The Week of Sound Venezuela Project at UNESCO during the 13th edition of La Semaine du Son Paris. After this amazing experience in La Semaine du Son Paris I became more interested in sound and noise from social perspectives, so I started a master’s degree on environmental studies. My final work was about noise pollution.

Ernesto: How is cognitive neuroscience of hearing applied to audiovisual sound design?

Gabriela Santiago: In this research I proposed to take into account more than just art when filmmakers are creating new stories. The idea of including cognitive neuroscience of hearing into sound design is to expand the possibilities to offer an immersive environment to the audience. When watching a movie, even just in stereo, the sound can play a very important role if the sound designer does a good job. Studying the brain processes involved in sound perception can affect the decision to use a specific sound effect in one given moment. For example, the use of pure tones in documentaries can modify the perception of realistic scenes; also the high and low frequencies associated to close-far sound events, or the interaural time differences and interaural intensity differences with the location of a sound source. I think it is important to consider psychoacoustics in association with the character’s perception of the world where a story is happening. And it is also important to know the areas of the brain involved in these processes.

Ernesto: Could you briefly expand on acoustic meanings in media arts?

Gabriela Santiago: In the interaction art-user-computer there are many different frameworks, and mine was the theory about acoustics, not just in the scientific way. Philosophy helps to make understandable what is art and what it is not, although there will always be controversy, and that was my starting point in that work: how sound was conceived from the beginning of human thinking, and how those thoughts can be use with technology to create interactive artworks. I tried to combine the thinking about acoustics from different times with the practice of art itself nowadays, using the technology as a bridge between them. The proposal was to include psychoacoustics in the creation of artworks that requires a user to interact with it, considering the experience of that user from philosophical concepts.

Ernesto: What are your current responsibilities?

Gabriela Santiago: I decided to leave art aside in the academic way. In this moment I am a Ph.D. candidate in applied sciences at Universidad de Los Andes. My supervisor is Professor José Aguilar who is now working with the Prometeo Project in Ecuador. The topic of my Ph.D. is acoustic management in intelligent environments. I am just beginning with it but it looks promising even though Artificial Intelligence is a new field of study for me. In 2014 I created my own company, Arte Acústica C.A., and I continue with it. The purpose of the company is the development of projects on acoustics and audiovisual production. I am also in the academic group that is developing the project of Interior Architecture as a Postgraduate Program at the Universidad de Los Andes, and I am in charge of the acoustic treatment course. Currently I am in Germany improving my German with the idea of a carrying out a short-term research stay as part of my Ph.D. studies.

Ernesto: You have collaborated a lot with the group of young acousticians from the Acoustical Society of Argentina. How are you involved with acoustical societies or groups?

Gabriela Santiago: Yes. I have been collaborating with the group of Young Acousticians from the Acoustical Society of Argentina with posters for International Noise Awareness Day and with several tasks for the Newsletters. I am the Venezuelan Representative of the Young Acousticians Network from the European Acoustic Association.

In projects like The Week of Sound, I tried to integrate also other International Societies, such as the Ibero-American Federation of Acoustics, and they were very friendly and helpful.

I had the opportunity to attend to the Young Professionals Workshop at INTERNOISE 2013 from the International Institute of Noise Control Engineering (I-INCE) and I learned about the importance of these societies and groups … and also about networking.

Gabriela Santiago: Maybe in other countries of the region is not the same, but at least in Venezuela acoustics is seen as a completely new field of study and a lot of people do not know about acoustics. Nevertheless, I think that the interest on acoustics is growing in the youngest generations from South America. The fact that the International Congress on Acoustics (ICA 2016) was held in Argentina last year is an amazing step. I also find important that new editions of The Week of Sound are always being held in different cities of South America. It is our job as South American Acousticians to spread the word and make our people conscious about what acoustics implies.

For me, it is funny that a lot of people think that their profession is the most important one. Sometimes, if you ask a lawyer, a historian, a doctor, an artist, a programmer, … they all think that their profession is essential. And maybe they are right. But with acousticians worldwide I see everything differently. First, we enjoy what we do, and then we find it absolutely useful. But we all know that normally acoustics is not taken with the importance that it should. Anyway, we keep working and enjoying it, so it will take some time for this internationalization to be more accessible to people that are not involved in the field.

Ernesto: Thank you very much Gabriela!