Welcome to the fifth installment of Interviews with Interview with Latin American Acousticians. You can find the previous interviews at https://acousticstoday.org/accolti.

Today we interview Professor Pablo Luis Rendón from the Autonomous National University of Mexico. His research topic has been  nonlinear acoustics since the first steps of his Ph.D. at the University of Cambridge. He lectures for students of diverse backgrounds including music students on one hand and physics and engineering students on the other. Music is present in several parts of this interview. Citations of some of his publications are at the end of this interview. 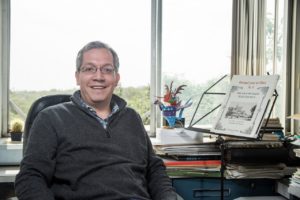 Ernesto: Hello Professor Pablo Luis Rendón, it is a great pleasure to interview you. Wellcome to the section Interview with Latin American Acousticians of  Acoustics Today.

Ernesto: Where are you from and what was your education on acoustics?

Professor Pablo Luis Rendón: I was born in Mexico City, and I obtained my undergraduate degree there as well, at the Universidad Nacional Autónoma de México, where I obtained a BSc in Physics. Like many of my friends in the academic world, though, I have a combined fascination with both science and music, which I also studied for a number of years. I went on to do the course called Mathematics Part III at the University of Cambridge, and there I met David Crighton, who taught a course on Nonlinear Acoustics. I took the course and ended up writing an essay on “The periodic wave problem in nonlinear acoustics,” which he graded. I was later enormously fortunate to have David as my Ph.D. advisor. My thesis work was on theoretical problems of nonlinear acoustics, and although now I do quite a bit of experimental work with my students, I don´t think I have strayed too far from the line of research I pursued many years ago for my Ph.D.

Ernesto: Let me mention that you received the Rayleigh–Knight award, given by  University of Cambridge for your Ph.D. thesis work. So, is nonlinear acoustics one of your current research topics? Do you study nonlinear acoustics in relation to what applications?

Professor Pablo Luis Rendón: Nonlinear acoustics is definitely the research topic I have most worked on, and happily my interest in the subject is as strong as ever. There are a surprisingly large number of applications where the study of nonlinear acoustic propagation is relevant, with the most important of these being, historically, aeroacoustics. In this context, I have worked, for example, on the nonlinear propagation of broadband noise and the reflection of sonic booms against the ground. More recently, though, I have devoted quite a bit of my time to the study of brass musical instruments[1], which provide a beautiful example of a system which we can easily fit into a lab and where nonlinear propagation occurs at dynamic levels which we identify with the instruments being played loudly. Our study of these instruments has, in turn, motivated an ongoing investigation of the formation of vortical structures at the open end of horns with different geometries, where the associated losses can be significant in both musical and industrial applications.

Ernesto: Would you briefly comment on some aspects of the reflection of sonic booms against the ground?

Professor Pablo Luis Rendón: When analyzing the viability of developing civil high speed aircraft in today’s world, the levels of noise that can be associated with sonic booms are considered a community acceptance problem[2]. Further, when these aircraft accelerate from Mach 1 to cruise speed, a “superboom” may occur. François Coulouvrat and I studied the reflection of these superbooms against the ground, and we found that passive absorption mechanisms cannot be relied on to achieve significant mitigation of the superboom’s amplitude.

Ernesto: You are also a musician? What instrument do you play and how is your activity with music?

Professor Pablo Luis Rendón: I play the flute, and I used to be quite active as a flute player when I was a teenager. Nowadays I mostly play by myself or with small groups of – very patient – colleagues. I do still attend concerts and listen to CDs very regularly. Music permeates a good part of my days, both when I’m working and when I find time to relax.

Ernesto: What results or interesting observations have you arrived on brass instruments?

Professor Pablo Luis Rendón: I am interested mostly in the manner in which nonlinear propagation affects the sound of brass instruments when they are played loudly. The sound produced by these instruments at high dynamic levels is normally described as “brassy,” but different groups have actually shown that this quality of sound depends not on the material the instrument is made of, but rather on the instrument being long enough to allow for nonlinear steepening to occur inside the instrument resonator. We have shown for trumpets and trombones that the characteristic brightness of this sound is indeed related to the nonlinear steepening of the progressive waves propagating inside the instrument. Also, working with finite-amplitude progressive waves, we have studied the way in which nonlinear effects allow players to modify their embouchure and play with varying degrees of brassiness.

Ernesto: What are your current responsibilities?

Professor Pablo Luis Rendón:  I guess my responsibilities are not that different from those of most of my colleagues. My main focus is on doing research, but I also lecture quite a bit. Most of my lecturing has to do with acoustics, as I regularly teach courses on introductory linear acoustics, musical acoustics, and nonlinear acoustics.  I also lecture on applied mathematics and physics of fluids. In Mexico, most physics and engineering students write thesis both at a graduate and at an undergraduate level, which means I read lots of thesis. I quite enjoy this part of my work because students very often have original ways of putting things which make me think anew of familiar concepts and results, and frequently I am also introduced to fields I knew little about beforehand.

Ernesto: What are the institutions where you do your research and where you lecture?

Professor Pablo Luis Rendón: Nowadays I do all my research and my lecturing at the Universidad Nacional Autónoma de México (Autonomous National University of Mexico). The University has an Acoustics Laboratory at the Centro de Ciencias Aplicadas y Desarrollo Tecnológico that houses both anechoic and reverberant chambers and is generally well-equipped for research in physical acoustics.

Ernesto: What is the background of your students?

Professor Pablo Luis Rendón: My students come from very diverse backgrounds. Since I teach courses aimed at music students on the one hand and physics and engineering students on the other, my courses need to be tailored to appeal to each of these groups while not alienating them with academic requirements beyond their reach. Teaching acoustics to music students using very little maths has actually been one of the hardest challenges I have faced in my academic career.

Ernesto: Do you think music students have specific aptitudes that facilitates them to learn about acoustics?

Professor Pablo Luis Rendón: In principle I think musicians are singularly well equipped to grasp key concepts in acoustics mainly because they already possess excellent listening skills as well as a hands-on understanding of how their instruments work and how it is possible to affect the sound they produce. However, physical phenomena are frequently counterintuitive, and I find it hard to explain some ideas without making use of even very basic mathematics. I find that in these situations it is key to establish a good communication with the students, and lectures more often than not turn into conversations between the students and myself.

Ernesto: Do you participate in groups or societies on acoustics?

Professor Pablo Luis Rendón: Actually, for some reason I do not participate very actively in acoustical societies, although I guess I should. I am a member of both the American Physical Society (APS) and the Acoustical Society of America (ASA) and regularly attend conferences organized by these societies, but the meetings I most look forward to are the International Symposia on Nonlinear Acoustics (ISNA), all of which I have attended since the 1999 Göttingen ISNA 15.

Ernesto: You have several experiences on academic mobility during your education and also as a researcher. Would you comment us about some of these experiences?

Professor Pablo Luis Rendón: During my studies I was very lucky to live in Montréal, Cambridge, and Paris, and I found these three cities wonderful. One reason for this was that they all have very large and diverse student communities and very rich musical traditions. However, it seems to me that there are some quite significant differences in the way in which academic activities are conducted in Canada, the United Kingdom, and France, and it has turned out to be quite instructive to have had first-hand experience of these contrasting ways of doing things – I have learned quite a bit from each one of them. Recent visits to Le Mans and Edinburgh have proved incredibly stimulating, as these groups are responsible for a large amount of the more interesting research done on brass instruments, and they are still very enthusiastic and generous when it comes to the exchange of ideas.

Ernesto: Would you share with us your thoughts on the internationalization of acoustics?

Professor Pablo Luis Rendón: In the years since I started working in acoustics I have met people from all over the world who share, obviously, an interest in the field, but very often also share a love of music, for example. This contributes, in my opinion, to making ours a very friendly community across all borders. I always run into some of these friends at conferences, and we constantly comment on the large number of students and researchers presenting excellent work who now come not only from the usual places – the US, the UK, France, Russia, Japan – but now come from all over, including Latin America. I think it is very encouraging in the particular case of Latin America to confirm that young engineering and physics students are now not only interested in the more traditional areas – astrophysics is a good example – but are choosing acoustics more and more often as their field of specialisation. Increasing diversity can only have a positive effect on the field.

Professor Pablo Luis Rendón:  I was working through some elaborate mathematical calculation during a lecture a few days back, and realised I had made a mistake. In correcting the mistake I then understood that there was a simpler, more elegant way of arriving at the result I sought. There are still a large number of interesting open problems in acoustics, but even among the well-known results I often find that maybe I don’t fully understand the physical phenomenon I am dealing with. I think that sometimes we underestimate how complex many problems in our field are, and how subtle the understanding required to tackle them adequately should be.