10. The World Through Sound: Reflection, Refraction, and the Principle of Least Time

​The World Through Sound: Reflection, Refraction, and the Principle of Least Time

Welcome to another installment of The World Through Sound. Last time, we talked about mode shapes and the blurry line between things that are discrete and distinct and things that are continuous and fluid. This time, we’ll cover reflection and refraction, and learn about the “Principle of least time” that governs things from the physical behavior of light and sound to the instinctual behavior of animals.

Reflection is a simple enough concept and one that we experience pretty much every day. Whether it’s our reflection in a bathroom mirror or off of the surface of a still pond, the reflection of light is incredibly common. When we look into a mirror we see the world duplicated within the reflection, a copy on the other side of the barrier of glass. Sound has reflections as well. You may have experienced this with an echo, a reflection of a sound off a distant wall or mountain, loud and clear enough that it sounds like a distant copy of yourself is calling to you.

Sound reflections are much more common than those clear echoes, though. While a faraway object might allow us to pick out an echo from the original sound, pretty much every solid object generates a sound reflection. We spend our days awash in sound reflections from everything around us, to the point that we don’t even notice them. If buildings reflected light like they do sound, it would be as if every hard surface was a highly polished mirror. But because of the speed of sound, rather than experiencing those echoes as distinct repetitions of the sounds we hear, we often experience those reflections as amplification and reverberation, making the sounds louder and causing them to die out more slowly.  These reflections (especially the first ones to reach us) are what give rooms their sonic character, and figure greatly into concert hall acoustics. In addition to reflection, both light and sound can undergo refraction. Refraction is when a material bends an incoming wave, causing it to change angles. Again, this effect is quite apparent with light, such as when the lens of a magnifying glass bends light to make an object appear larger. Or a straw in a glass of water appears to be broken or bent when viewed from the side. This is because different materials cause light to move at different speeds. For example, light moves more slowly through water than in air, causing it to abruptly change direction when going from air to water and back again. For sound, examples of refraction are a little less obvious. While acoustic lenses certainly do exist , they’re not nearly as ubiquitous as the optical lenses around us. Instead, acoustic refraction takes other forms, and you may have even experienced it as something like an acoustic mirage.

While the word mirage may conjure up images of cartoon characters hallucinating a lush desert oasis where there’s only hot sand, a real mirage isn’t nearly so extravagant. Mirages occur when light bends away from the hot ground in a way that looks a lot like a reflection, making sand (or asphalt) look like a glimmering pool of water at a distance. This occurs because light moves more slowly through cold air than hot, and the hot ground creates a gradient of temperature that refracts the light.

For sound, the most interesting effects occur when cold air gets trapped under a layer of warmer air. This is called a “temperature inversion,” and it can cause some surprising effects. During a temperature inversion, sound bends downwards, allowing it to clear obstacles and then come all the way back to the ground. This can allow sounds to travel for miles further than usual, soaring over houses and trees. This is why distant sounds can appear much louder in the winter or at night, when the cold ground can suck warmth from the nearby air, causing sound to curve downwards. This also occurs during the day over lakes, which are often cooler than the surrounding air. You can even hear this difference yourself by listening to a friend yelling across a lake or open field. 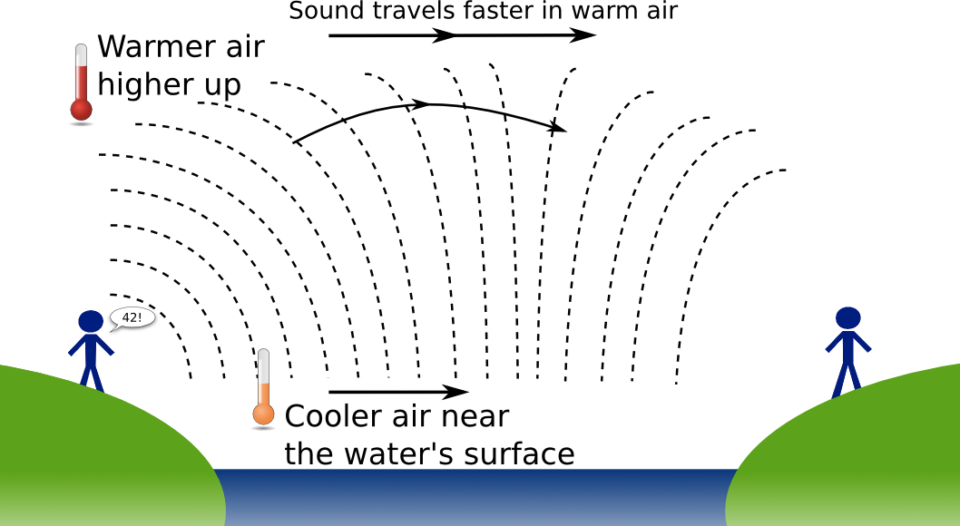 “During a temperature inversion or over a body of cool water, sound refracts downwards, helping it to carry further.”

Refraction also occurs to sound in the oceans, with major implications for humans and animals alike. Temperature inversions can happen in the ocean as well, creating so-called shadow zones that sonar cannot reach. These shadow zones are large enough that you can even hide a submarine there. You can even have places where sound refracts both up and down, like the SOFAR channel. This is a layer of water well below the ocean’s surface where the sound speed is at its lowest. Sound that’s generated in this channel can for very long distances, as it refracts up and down around the channel’s axis, never interacting with the ocean surface or bottom. Sounds here can carry for thousands of kilometers, and whales will dive down to the SOFAR channel to communicate over long distances with each other. Scientists have even used sound in the SOFAR channel to measure the temperature of the ocean to track climate change! 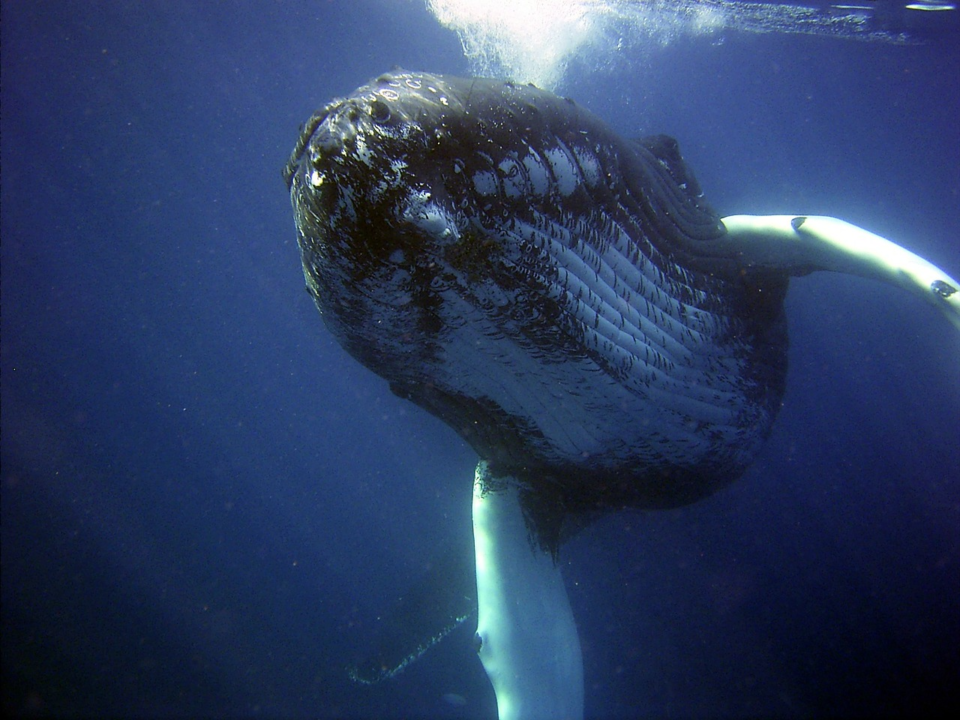 “Using refraction in the SOFAR channel, whales can communicate for hundreds of kilometers!”

Up to this point, reflection, refraction, and wave speed may all seem like disconnected or (at best) largely unrelated concepts. But in truth, they are all tied together with a concept known as “Fermat’s Principle,” also known as the “Principle of least time.” This principle states that a wave moving from one point to another follows the path that minimizes its travel time between those two points. Using this principle, we can determine that a wave reflecting off a flat mirror will bounce off at an angle equal to its arrival angle, which is both intuitive and correct. We might also derive the more complex behavior of refraction, which follows a law known as Snell’s law. Without going into the math, this law shows that a wave will bend to steeper angles in slower media, which is often described as “waves bend towards lower speeds,” or, as I often remember it, “waves are lazy.” Of course, if you want to dig into the nitty gritty, Richard Feynman does this much better than I ever could.

Animals are wise to this law, as can be seen in their behavior. One mathematician wanted to test if his dog, a Welsch corgi named Elvis, would naturally find the path of least time. To check this, the mathematician threw a ball into a body of water, and tracked where the point where the dog would jump in the water to swim for the ball. Based off the dog’s swimming speed and running speed, the mathematician used Snell’s law to determine the optimal point for the dog to jump in the water to get to the ball as quickly as possible, and amazingly, the dog was very close! Fermat’s principle of least time, is hard at work in the natural world. 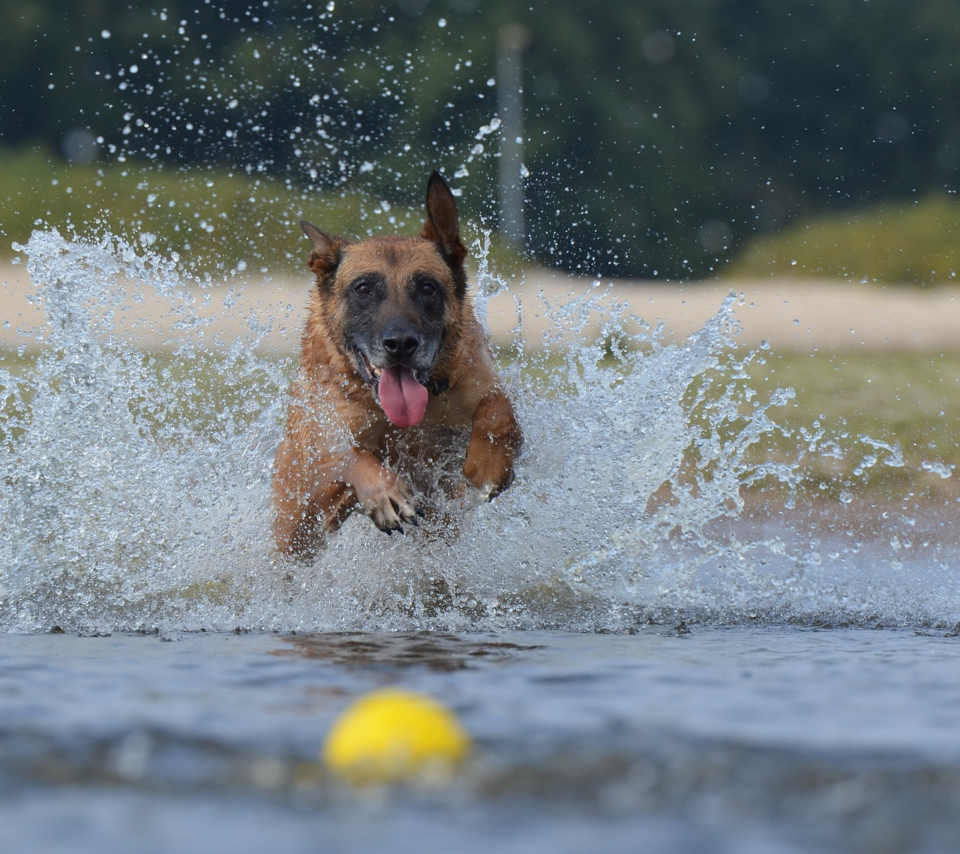 “A dog obeying its instincts and Fermat’s principle of least time. No calculus required.”

However, if you’re at all like me, Elvis’ ability to obey Fermat’s principle raises an interesting question. How does light, sound, or even an animal, know what the path of least time even is? Clearly, they aren’t doing calculus to figure this out, and even instinctual behavior can’t explain the behavior of an elementary particle like a photon. And yet, somehow, this incredible law stands. It’s all too much for a physicist to believe, and the principle was even rejected out of hand for this very reason when it was first suggested back in 1662! And while there have since been very convincing explanations for the how and why of Fermat’s principle, I will leave it to the reader to ponder the big question of what principles like Fermat’s, that suggest some sort of intent in nature, might mean for science.

Fermat’s principle is not the only principle of this sort. It’s a member of entire family of scientific principles called “Variational Principles.” These principles show up in classical mechanics, relativity, and even quantum mechanics, and always take the form of some value that must be either minimized or maximized. What’s interesting about these principles is that they’re an alternative way of formulating physics from the traditional methods we might know. Using the “Principle of Least Action,” likely discovered by Leibniz, you can derive the classical equations of motion without ever using Newton’s laws. 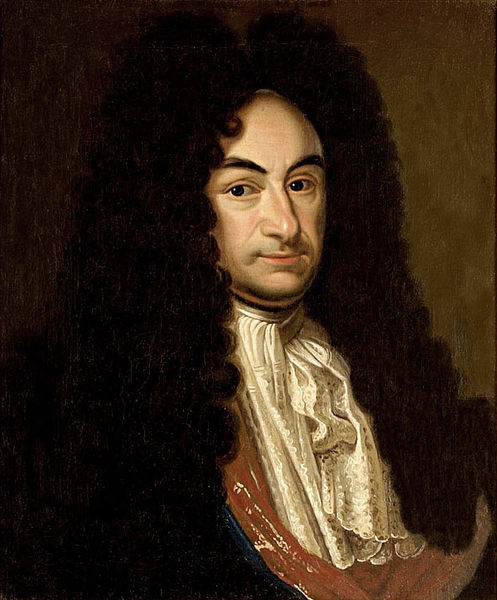 “Leibniz doesn’t need Newton’s laws, because he has the Principle of Least Action.”

Next time, on the World Through Sound, we will consider the concept of linearity, and why this simple assumption is every scientist’s favorite lie.