12 • The World Through Sound: Absorption

Welcome to our final installment of The World Through Sound. Last time, we learned about linearity, non-linearity, and how linearization allows scientists to treat complicated systems like much simpler analogs through approximation. In this article, we will explore the concept of acoustic absorption and how sound can take many forms, including pressure, flow, and temperature.

Sounds don’t last forever. In an open environment (like the outdoors) a sound will spread over a growing area from its starting point, the energy spreading out, causing the sound to get quieter and quieter until it finally dies away. Similarly, in an enclosed room the sound will also spread, but only until it fills the room. In both of these cases, though, there is an effect beyond the spreading of acoustic energy that causes sound to grow quieter: acoustic absorption. Acoustic absorption describes pretty much any process that causes sound energy to be dissipated, and intelligent use of acoustic absorption is how we keep concert halls from turning into echo chambers or ensure that speech in offices and classrooms is intelligible. 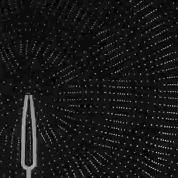 As sound moves away from a source, it spreads over a larger and larger area.

What part of a room is responsible for most of the absorption though? It might be natural to assume that air absorbs a lot of the sound since that’s where the sound spends most of its time. But because air is a reasonably good acoustic medium, sound can move through it with only a little bit of loss. These losses only become noticeable at very long distances such as in outdoor acoustics.

But what about the walls and other surfaces of an enclosed space? With lots of jutting angles to break up the waves, you might expect that good solid walls and objects help to bring down the noise. Again, though, solid walls are good reflectors of sound, acting much like how a mirror would for light. While walls are good for redirecting sound, they aren’t that great for getting rid of it. With only solid walls and air for absorption, sound can reverberate for a startlingly long time. 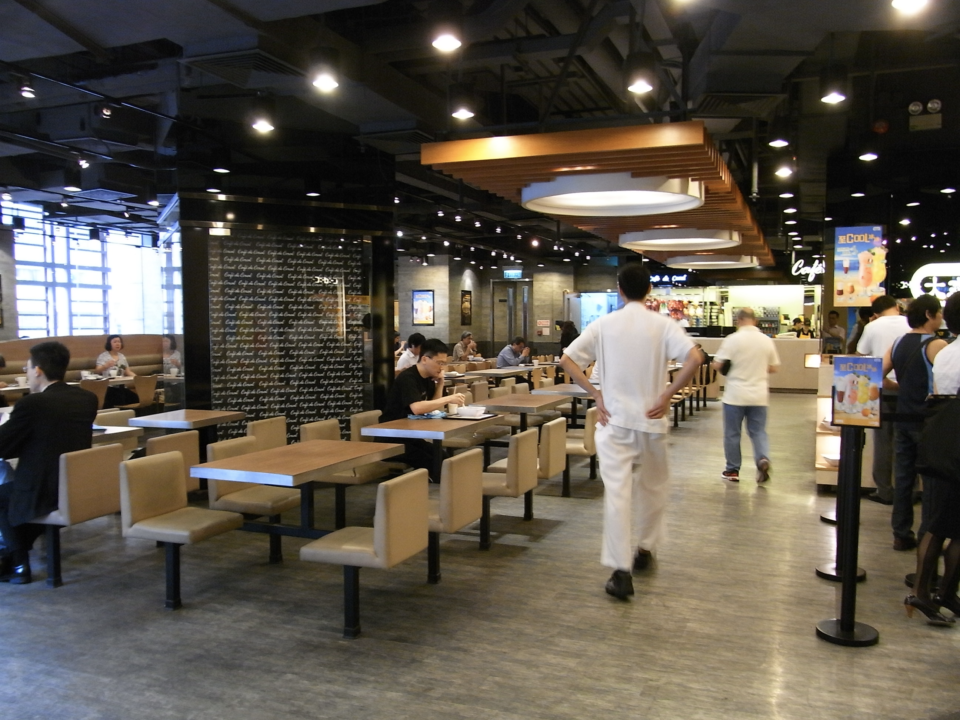 An exposed ceiling and ductwork might look trendy, but it won’t do much for acoustics.

Certain materials are very good for absorbing sound. Any sort of cloth or porous material, for example, will generally convert sound energy into heat. One way to understand this is to think about how sound causes air to move. While sound is generally thought of as a pressure wave, there is also air motion associated with the sound. The regions of high and low pressure are caused by sound flowing into and out of different regions, bunching up in some areas and thinning out in others. The equation a scientist would use here to quantify this relationship involves specific acoustic impedance, which gives a relationship between pressure and air flow, and the strength of that connection depends on air density and sound speed. Naturally, any porous material that restricts the flow of air is going to prevent that motion, and thus reduce the energy in the sound wave.

At least, that’s the way the explanation usually goes. There’s a bit of a wrinkle to this explanation, albeit one that requires a bit of background knowledge about how sound moves in a room. For many of these absorbing materials that impede air flow, like carpets and wall tiles, the absorbers are on or near a solid surface. It turns out that because those surfaces reflect sound, there’s not actually a lot of flow in those areas. Instead, there’s a trade-off so that the flow is low but the pressure is high. But if this is the case, then why are carpets and acoustic tiles still effective absorbers? Shouldn’t the low flow prevent them from being useful?

To find the answer, we must first consider a rather surprising connection between sound and temperature. As we have previously discussed, sound is a pressure wave. But, as you may remember from physics class, a gas under pressure will increase in temperature. The equation that should come to mind, here, is the ideal gas law that directly relates pressure and temperature. As a result, where the pressure of a sound wave increases, so does the temperature. I know that I was surprised to learn this fact, and I was even more surprised to learn of an entire branch of acoustics devoted to using sound to manipulate heat, called thermoacoustics, that has led to successful acoustic refrigerators and even sound lasers! 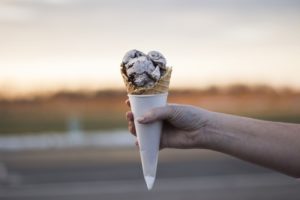 Sound can be used to keep your ice cream cold. Is there anything acoustics can’t do?

So what does temperature have to do with sound absorption? A lot, it turns out. Just like how materials that impede flow are good at dissipating the acoustic energy associated with flow, materials that insulate temperature are great for dissipating the acoustic energy of temperature. This is why hiding under a blanket is good for dulling sound, why fiberglass insulation helps keep out unwanted noise, and why carpeted rooms are so much quieter than rooms with tile. Even better, because reflecting surfaces cause the pressure (and therefore temperature change) to peak near a wall or floor, thermally insulating acoustic tiles and carpets are perfectly positioned for maximum effect in those locations!  The topic of controlling sound in a room will be highlighted in an article by Dr. Bonnie Schnitta in the fall 2016 issue of Acoustics Today, and techniques for managing reverberations in large spaces was covered by Russ Berger in *From Sports Arena to Sanctuary: Taming a Texas-sized Reverberation Time*. 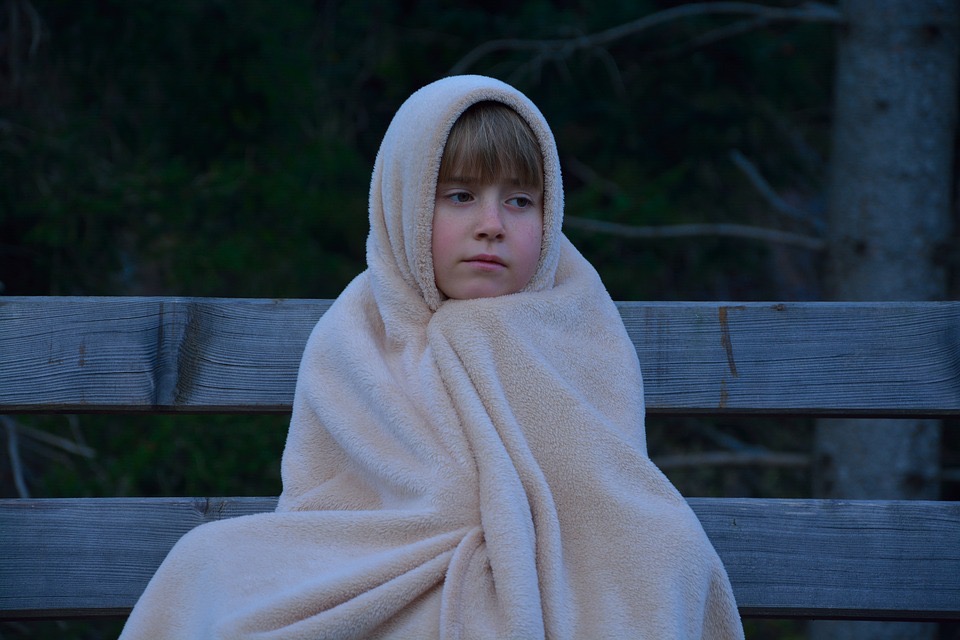 Physics is full of equations that connect seemingly different values. There are equations like the ideal gas law that relates pressure and volume to temperature. There are equations of motion and so-called laws (like Newton’s law), that tell how objects move. In all of these equations, we draw connections between dissimilar quantities, but in the process we can see how those concepts are really related. This is the power of substitution, probably the most useful mathematical tool to which we have access. With substitution, science can make the leaps of insight that further our understanding of the world. Sound is made up of waves of pressure, but it’s also made up of waves of flow and waves of temperature change and waves of density. Depending on which angle we consider, different solutions present themselves.

This has been the final installment in this series of The World Through Sound. For those of you that are new to the world of acoustics, I hope that I have taught you something and shared just a touch of the enthusiasm I have for this branch of science. For those of you that are experienced acousticians, I hope that I have done our field justice and the perspectives that I’ve given might help you to share acoustics with those around you. And if you are hungry for more acoustics reading (or you came in to this series late) you can find more of The World Through Sound and lots of other articles on acoustics at AcousticsToday.org. If you want to see more popular acoustics from me, you can check out my blog over at ListenToThisNoise.com or follow me on twitter @ListenToNoise.

In closing, I would like to thank Acoustics Today and the Acoustics Today Advisory Board for this internship and the opportunities for outreach that it has given me. I would especially like to thank my editor Arthur Popper for his feedback and help throughout this series and webmaster Daniel Farrell for converting my articles into such an attractive online format. And, of course, I would like to thank all of my readers for following this series over the last year. It really has been a pleasure sharing my love of acoustics with all of you, and I truly hope that I have passed at least a little of that love on to you.