Let me briefly present the acoustician interviewed in this installment, Professor Jorge Arenas of the Austral University of Chile. Dr. Arenas has a doctorate from the University of Auburn (Alabama, USA) and also an acoustical engineer degree and an MSc in physics from the Austral University of Chile. During his career, Dr. Arenas has contributed to areas  such as sound radiation of vibratory plates, the effects on those living in the surroundings of the acoustic barriers, design and characterization of sound absorbers made on the basis of environmentally friendly materials, and sound maps. Citations of some of his publications are at the end of the interview. He is currently the president of the International Institute of Acoustics and Vibration (IIAV) and director of the Institute of Acoustics, Universidad Austral de Chile. 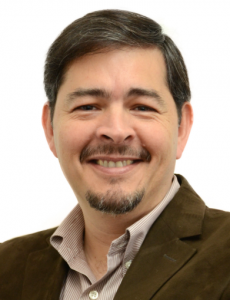 Professor Jorge Arenas is a member of the Acoustical Society of America.

Ernesto: Hello Professor Arenas, it is a great pleasure to interview you. Welcome to the section Interviews with South American Acousticians of Acoustics Today.

Professor Arenas: Thank you very much to Acoustics Today for this opportunity.

Ernesto: How did your interest in acoustics begin?

Professor Arenas: When I finished high school in Santiago de Chile, I realized that I had a great liking for music but also for mathematics and electronics. I was thinking of studying electrical engineering or sound engineering or something related. It was then  I discovered that in the Austral University of Chile there was a unique program in South America in acoustic engineering and I decided to go south to study this discipline. It was in the course of my studies that I discovered the “Lindsay acoustical wheel” and the huge amount of areas related to acoustics.

Ernesto: How did your studies continue and how did your academic career develop?

Professor Arenas: After completing my undergraduate studies, I received an offer to join the Institute of Acoustics,  Austral University de Chile. At that moment I had already decided that academic life was my great interest. However, I knew that I needed to strengthen my knowledge in science and so I decided to study theoretical physics. Thus I completed a master’s degree in physics with a thesis on diffraction and acoustic barriers. In the meantime, I obtained a scholarship from the government of Spain to conduct a research stay in 1991 at the Institute of Acoustics in Madrid. There I performed studies on applications of sound intensity and acoustic measurements. Then I took an advanced course at the Institute of Sound and Vibration Research (ISVR) at Southampton University. When I returned to Chile, I started to take my first steps by participating in several congresses and teaching courses on fundamentals of acoustics and vibrations. In 1997, I went to the USA to do my PhD in mechanical engineering at Auburn University under the direction of Professor Malcolm Crocker. My thesis was on mathematical methods in vibroacoustics. I also collaborated on a project at the National Center for Asphalt Technology during the last part of my doctoral studies. I returned to Chile in 2001 to the Austral University. Since then, I have taught acoustics and vibrations to undergraduate and graduate students, and I have carried out several research projects in the area.

Ernesto: Would you comment us briefly on the most outstanding projects in which you were involved?

Professor Arenas: At the end of my PhD studies, I was very interested in the sound radiation of plates with different conditions of contour since this subject has numerous applications in engineering (Arenas, 2008a). I also developed a study on the effects on people living in the vicinity of noise barriers, which are often indicated as the only alternative to control road noise (Arenas, 2008b). Another study that I found very interesting and that has allowed me to publish several papers is the design and characterization of environment friendly materials to absorb sound energy, which is currently a very important topic for engineering (Arenas and Crocker, 2010; Arenas et al., 2014; Arenas, 2016).

Ernesto: Would you like to tell us some applications about the models of plate radiation?

Professor Arenas: The main application is associated to the study of the efficiency as sound radiators of vibrating plates. Since radiation depends on the geometric characteristics, the physical properties, and the edge conditions of the plates, the objective of these models is to allow the relatively rapid calculation of the radiation efficiency using only matrix operations.

Ernesto: What kind of effects or relationships did you find in the studies on people living in the vicinity of noise barriers?

Professor Arenas: When an acoustic barrier is built, it becomes part of the landscape and has several impacts on ecosystems, road users, and those living in the vicinity of the barrier. The pilot study on the effect of a barrier in a residential area revealed that, although most residents felt that sleeping conditions improved, the main negative reactions were loss of sunlight and visual impact.

Ernesto: On which environment friendly materials were  the absorbers based?

Ernesto: Would you comment  briefly on a project in which you are currently involved?

Professor Arenas: My Institute obtained a grant from the Ministry of the Environment of Chile to update of the noise map of the capital Santiago, a city of more than 6 million inhabitants. A challenging aspect of this project has been to determine the contribution of public transport buses to the city’s environmental noise.

Ernesto: When did the origins of the Austral University acoustic engineering  program begin? Would you name a few of the professors in your undergraduate studies?

Professor Arenas: The acoustic program at the Austral University was created in 1967 by Professor Siegfried Erber, who  studied electronic music at the Institute of Experimental Music in Berlin. The first course was designed to train technicians and engineers on sound topics. Of course, the main field for graduates was the music industry, in recording studios, radio, and television. Over the years, other subjects such as signal processing, ultrasound, electroacoustics, and noise and vibration control were incorporated. Thus, the program of sound engineering was evolving to the current program of acoustics engineering. Some of the teachers I had in my undergraduate studies included Professor Jorge Sommerhoff, Professor Rodrigo Bahre, and Professor Alfredo Brian.

Ernesto: What other responsibilities do you currently have regarding acoustics?

Professor Arenas: From July of last year until July 2018, I am president of the International Institute of Acoustics and Vibration (IIAV), an institution affiliated with International Commission for Acoustics (ICA) and whose first founding president was Sir James Lighthill. It has been a great honor and privilege to be the first Latin American to be elected to this international position. One of my direct responsibilities is to cooperate in the organization of the next International Congress on Sound and Vibration to be held in 2017 and 2018 in London and in Hiroshima, respectively.

Ernesto: How would you describe the development of acoustics in Chile and its relation at the international level?

Professor Arenas: I believe that the development of acoustics in Chile has always been linked to the School of the Austral University. At the beginning, Chile had neither specialists in the subject nor appropriate legislation on industrial or on community noise. Several of the graduates of the program began to develop the area of acoustics in companies, universities, public institutions, and private institutions. This generated interest in the population, which began to realize that noise is a dangerous pollutant and measures should be taken to control it (Arenas and Suter, 2014). In this way, the alliances that were formed with universities in Germany, Spain, and the United States were key to developing  research lines on acoustics in Chile.

Ernesto: At a regional level, as you know, I studied in Santiago, Chile, at the Perez Rosales campus of the Technological University of Chile, known as the VIPRO, with professors who were students at the Austral University, such as Professor Jaime Delannoy, Professor Sergio Floody, and Professor Antonio Marzano, where I had colleagues from several South American countries. When I returned to my country, Argentina, I  met colleagues of about my age who graduated from  Austral University, such as Pablo Kogan and Germán Said. I comment on this to reflect the regional panorama of acoustics and the importance of Chile in this context and the question in this case is an invitation to expand on the regional context.

Professor Arenas: Indeed, the professors you named were our students at the  Austral University. I have met former students working in the academy in Spain, Brazil, Argentina, Colombia, and Ecuador, where they have created some undergraduate programs in acoustics that, in certain manner, fit to our model. Also, we used to offer a joint doctoral program with the Polytechnic University of Madrid. Several Latin American students from that program are now professors or researchers in different universities. In addition, a significant number of academics graduated in our own Master in Acoustics and Vibrations program that currently has several students. In this sense, Austral University has played a very important role in the current development of acoustic engineering in the region.

Ernesto: You have an important production of articles in peer-reviewed journals. You also have participated in three books in Spanish with collaborators in other countries. Would you like to tell us about your experience on publication of academic work?

Professor Arenas: Writing articles is a mandatory part of academic work. An investigation is not very useful if its results are not evaluated by peers and then transferred to society. I had the opportunity to publish some books and book chapters together with colleagues from Chile, the United States, Brazil, and Spain. Although most of what I have written is in English, the publications in Spanish allow me to be connected with more Latin American students. I am currently completing a book, in English, with Professor Malcolm Crocker on noise and vibration control for the publisher John Wiley and Sons. In addition, I must conclude this year a chapter with an Italian colleague, Francesco Asdrubali, for a handbook on ecomaterials to be published by the publisher Springer.

[1] The Lindsay acoustical wheel is a representation of the scope of acoustics related to the four broad fields of Earth Sciences, Engineering, Life Sciences, and the Arts. The Journal of the Acoustical Society of America, Vol. 36, pp. 2242, 1964.